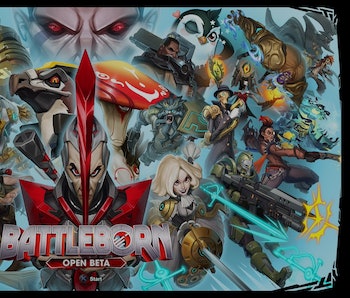 When Gearbox Software first unveiled Battleborn in the summer of 2014, the new project immediately showed promise thanks to the heavily stylized art and a beautiful soundtrack courtesy of M83. Known for their work on the Borderlands franchise, the development team behind Battleborn has been busy over the past few years to bring their vision of a cooperative MOBA to life on the Xbox One, PS4 and PC.

Last week Battleborn entered open beta on PlayStation 4, inviting everyone to jump into their new project and get a taste of what they’ve been working for the past few years. But after spending around 8 hours with the game over the past weekend – I had a difficult time staying interested in the humorous, cell-shaded universe Gearbox has created.

Battleborn takes place during the final defense of Solus, the last star remaining in a dying universe. Here various species have fled and split into factions based on their belief about the end of the universe: The Eldrid (who seek to preserve the natural order), The Jennerit Empire (who are conquers seeking immortality), The Last Light Consortium (a group of war profiteers), The Peacekeepers (who week to protect Solus) and The Rogue (a group of space pirates). These factions have all fought against each other for the last remaining resources and territory up until the events of Battleborn — where they discover that a race known as the Varelsi are the ones destroying their universe star by star. And so each faction sent out their best fighters, known as battleborn, in order to say Solus from being destroyed by the Varelsi.

On the surface it’s an extremely interesting premise that feels akin to something along the lines of Gears of War. It’s a story of desperation and resource scarcity that has the potential to be something detailed and emotional, but that’s not the view Battleborn seems to be taking.

Each mission features a short cutscene that sets up the basic plot along with an introduction screen for each character similar to an old cartoon – but doesn’t do more than provide some comedy-filled dialogue and a simple reason to kill things. You’ll be killing a bunch of basic enemies that lead up to a boss, engaging in a boss fight that features a few different mechanics and then seeing the reward screen pop up.

Battleborn’s two story missions took me roughly 40 minutes a piece of complete and with a total of 8 missions in the campaign – that’ll be around five hours of campaign for players to work through, which isn’t much at all compared to other titles. Honestly, it feels like the story was thrown in for the sake of having something that could be played in singleplayer or split screen which is something many similar titles don’t offer. Granted, we haven’t seen the entire campaign – but it’s something that is a little worrisome for a game promising a detailed world for us to enjoy.

Battleborn also features a versus mode which is where you will be spending most of your time within the game. Here, you’ll take control of one of 25 different heroes and dive into 5v5 matches filled with enemies and simple objectives.

What’s interesting though is despite the fact Battleborn doesn’t consider itself a MOBA, the game is built around core concepts from the MOBA genre. Every match features mercenary camps, objectives similar to towers and minion lanes that have to be managed by players. Take the Incursion game type for example, where players work to take out two sentries while defending their own. These sentries are towers like the ones you’d find in SMITE or Heroes of the Storm, but smaller in scale and less difficult to take down. They’re also accompanied by minions which must be managed to make pushes on your opponent’s sentries and mercenary camps that you can secure for an extra boost to your push.

The problem I had playing Battleborn’s multiplayer was that every aspect of a traditional MOBA was present, but it was simplified for the sake of making things easier and more streamlined – which is quite frustrating considering the competitive depth the genre has as a whole. MOBA titles are about pushes and overwhelming objectives with precision and I couldn’t help but feel that’s missing with Gearboxes latest title.

That said, Battleborn does have a fantastic cast of characters to play around with. During my time with the beta, every battleborn I played as felt unique in personality and playstyle with a simple but interesting set of abilities. Unfortunately, the simplicity of the character abilities and level-up system once again hurts Battleborn here – because no matter how you work to customize your character, you’re going to fit the exact same role every time. Now it’s fair to say that’s the main point of a MOBA style game, but the issue here is that the key character upgrades you’ll choose? Have no impact on the way you actually play you character in any capacity. I can’t take a character and build a specific way that matches my playstyle because Gearbox has already done that for me.

As a whole, Battleborn suffers from a focus on simplicity and a desire to be too many different things at once. While I really respect Gearbox from trying to make their latest a cooperative, singleplayer and multiplayer experience all at once, it’s honestly the factor that’s driving it down. Personally I was excited to see Battleborns world come to life and witness how the story shaped out – which doesn’t feel like the simple kill-repeat missions the beta offered. Versus itself is definitely fun despite its simplicity, but after a few hours playing in the two modes offered it still felt as if something was missing.

While I’m certain that the game will develop a loyal audience and that the initial launch will go quite well come May, I’m curious as to how the game will shape up considering the fact that a season pass is already being marketed within the open beta.

Battleborn releases on Xbox One, PlayStation 4 and PC on May 3.