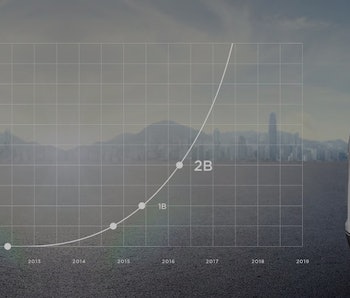 Tesla says its cars have traveled 1 billion miles in less than a year, saving drivers and the environment 91 million gallons of gasoline.

The company tweeted a graph that predicts exponential growth in the number of miles traveled moving forward, as users purchase cars and the range of the batteries increase. It took Tesla between mid 2012 and mid 2015 to reach its first billion miles traveled, and in less than a year, drivers doubled that number to 2 billion.

By 2017 the company’s graph predicts Tesla drivers will add another 1.5 billion miles to the total, and it just keeps going up from there.

Tesla has been looking to comfort concerned investors as its stock has been slowly declining over the past couple months. But that may start to change now that the Model 3 has been unveiled. CEO Elon Musk, earlier this week, said the company’s new car sold 325,000 pre-order units in its first week, amassing an estimated $14 billion in sales. As for Model 3s adding miles to Tesla’s grand totals, that may have to wait another year-plus. The company expects to begin shipping its new car to pre-orders by the end of 2017.

Based on low-end estimates of the company’s quarterly sales reports, Tesla sold roughly 50,000 units in 2015, with the Model S easily outselling all other major large luxury vehicle competitors, including the Mercedes S-Class, the Lexus LS, the BMW 6- and 7-Series, and the Audi A7 and A8. The large luxury vehicle market, overall, dropped 1 percent while Tesla Model S grew its own share by 51 percent.

A 2015 study from KPMG predicts the number of automotive miles driven per year in the U.S. could jump by another another trillion miles by 2050. This is despite millennials moving to urban centers and abandoning cars. KPMG points to the popularity of ride-on-demand services as the source of the growth despite the declining numbers of personal car ownership.

Elon Musk has hinted in a previous investor call that the company may consider either selling future autonomous cars to ride-sharing services or simply cut the middle man out altogether and provide its own car sharing service.

A Tesla ride-sharing service would turn the graph tweeted today into a vertical line for the foreseeable future, but there are obviously no Uber-but-for-Tesla plans that we know of in the works.

For now, if you want a real-life indication that Tesla’s miles-driven figure is on a path for skyrocketing, even if not in the next year, you need look no further than the number of pre-orders the company is dispensing for its Model 3. It seems as if there will be a lot of those driving around soon enough.