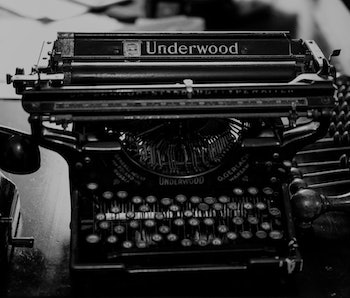 “There will be no C, X or Q in our everyday alphabet. They will be abandoned because unnecessary. Spelling by sound will have been adopted, first by the newspapers. English will be a language of condensed words expressing condensed ideas and will be more extensively spoken than any other.” - John Elfreth Watkins Jr.

In 1900, John Elfreth Watkins Jr. wrote an article for Ladies’ Home Journal making predictions for the next 100 years. Watkins wasn’t a sci-fi author or even a particularly eager futurist. He was actually a railroad engineer, but his forecast for the year 2000 is an oft-cited work of predictive futures.

All told, he made a couple dozen predictions, but his thoughts on the future of the alphabet stands out as particularly odd and particularly noteworthy. It isn’t a look at a major technological advancement, but a prediction that a need for communicative simplicity would have us changing the way we read, write, and speak.

Watkins Jr. thought English writers and speakers would eventually do away with the extraneous letters that require careful word choice. He thought C, X, Q were slowing down communication. But why?

The first thing to know is that Watkins Jr. was not out on a limb. As The Victorian Internet author Tom Standage has explained, the five-needle telegraph that omitted the letters C, X, Q, J, U, and Z. The reason behind the telegraph’s omissions was the limitation inherent to the machine’s design: there were only so many possible combinations, and so the alphabet had to be limited to twenty letters rather than twenty-six. There were restrictions as to what words could be transmitted, but using the machine didn’t require a codebook, which was a big improvement.

That said, the needle telegraph was a product of the 1830’s. Watkins Jr. made his predictions in 1900, 70 years later. Things had come a long way and though the telegraph industry was bigger than ever before, communication was showing signs of becoming faster, more efficient without the modification of the English language. Typewriters were increasingly common and made fine use of QWERTY keyboards, which included all of the alphabet’s letters.

For the sake of argument, though, let’s assume that telegraphy was going to continue astronomic growth and dictate the way we used the alphabet. Could we really endeavor to change an alphabet that had served us relatively well for centuries? Probably not. Or, at least, probably not very effectively over a 100 year period.

Change takes time and as a society, we don’t tend to do very well when it comes to agreeing with one another. Phasing out simple, necessary words en masse would’ve been an adjustment that likely would’ve taken much, much longer than 100 years. Authors of books would have to start using different words, we have to start talking to one another differently and we’d be constantly maneuvering around what we meant in order to make the words fit the C, Q, and X-less parameters.

It was a perfectly well-intentioned prediction, and maybe part of what fed into his idea that English would be the most-spoken language in the world. In theory, simplifying and condensing English would make it easier to learn, possibly making it more popular. As it is, English is a heinous language to learn, with its silent ‘p’s and things like the “read”/“read” and “lead”/“lead” conundrums.

There’s a better than good chance that our attempts to simplify English would’ve complicated it further, though. We’d likely be faced with two different systems, alternate spellings, and conflicting ideas on pronunciation. We’d need a pretty sophisticated and ultra-standardized system to make sure we were all on the same page.

At the time of Watkins Jr.’s writings, the Oxford English Dictionary hadn’t yet been completed. It was very much in progress, but it wasn’t until a few decades later that we’d see a completed version. Webster’s dictionary had been published in the mid-19th century, though, and theoretically, a constantly updated dictionary of the same kind would’ve aided the quest to simplifying English.

Moreover, constantly updating editions would’ve made standardization difficult, and getting people to agree on and/or recognize alternate forms of certain words as correct or incorrect seems wholly unrealistic, which is probably ultimately why it never came to pass.

Maybe if we’d had an elegant system for disseminating changes and standardizing new forms of words, we could’ve simplified English immensely. Maybe if better technology hadn’t come along to unseat the telegraph, we’d still be using the five-needle machines and operating with twenty letters instead of twenty six. Maybe if we weren’t so stuffy about our damn dictionaries, we’d have entire buildings filled with updated edition after updated edition. Maybe in an alternate future.

More like this
Innovation
3 hours ago
This self-healing material could fix your dinged-up car in 30 minutes
By Molly Glick
Culture
8.6.2022 11:38 AM
60 gifts under $25 on Amazon that'll go over well no matter what
By Christina X. Wood and Cassandra Seale
Mind and Body
7.31.2022 10:15 PM
The 7 softest T-shirts
By Scarlett James
Related Tags
Share: