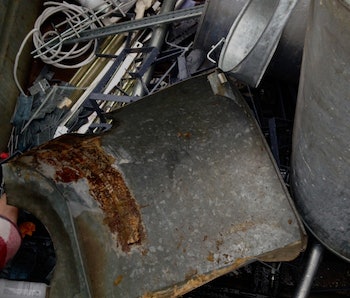 Last month, Max Liboiron, a professor of discard studies at Memorial University of Newfoundland, visited the European Organization for Nuclear Research (CERN) in Switzerland to check out the world famous Large Hadron Collider and go dumpster diving. What was she looking for? Tools. Devices. Detectors. Wires. Scrap metals. An expert in “Slow Disasters,” Liboiron studies what humans discard and what it does to the environment over long periods of time. A facility like CERN, with its sensor-packed, 16.8-mile long tunnel deep underground, can throw off a shocking amount of detritus. But Liboiron was surprised to find that she wasn’t the first one to rifle through Switzerland’s most valuable garbage. A scientific ecosystem had already sprung up around the ring of the collider.

“Everyone thinks they know waste, because we deal with garbage every day,” says Liboiron. “But household garbage is fundamentally different from what garbage is on a larger scale.”

Nearly 97 percent of the trash humans produce is industrial and the ways we go about discarding that equipment, recycling it, and repurposing it is totally different from how we treat the garbage collected by your local sanitation services. And that includes waste created by scientific research projects.

Liboiron uses her position as the head of the Civic Laboratory for Environmental Action Research to advocate for open science hardware and lead “a small but growing movement for people who make technology and instruments open source,” something she describes as “very much against the model that runs many universities around the world.” Fundamentally, she’s concerned about the sustainability of the research ecosystem. This is why she was excited to participate in the Gathering of Open Source Hardware (GOSH) this past March, and why she was excited to see it take place at CERN.

The aim of GOSH is to bring together open source hardware enthusiasts from the science and tech world in order to create strategies for advancing the movement. But open source acolytes don’t care much about talk — they’re about action. Shortly after arriving at CERN, Liboiron started talking to one of the facility’s executives about recycling. Rather than referring her to the nearby facility charged with dealing with Large Hadron Collider waste, he offered her to show her around the dumpsters. The GOSH attendees, intrigued by this unusual tour opportunity, decided to tag along. Suddenly there were a bunch of Ph.D.s digging through the garbage. To Liboiron, this was a beautiful scene. To the attendees and the executive, this was a surprise.

And Liboiron learned something surprising as well: The scientists who work at CERN had already picked through several dumpsters. At one point she thought a facility worker was getting ready to tell her off. When he didn’t, she realized he was simply waiting to look in the dumpster she was perusing.

“No one cares,” she says, citing CERN’s reputation for encouraging the development of open hardware. “And that was amazingly refreshing.”

Liboiron managed to find herself a fan that she plans to use for building a new incubator for her work in marine plastics research, plus some wires and aluminum peelings.

“Disposability isn’t normal,” she says. “As the environmental movement has grown, people are beginning to recycle more. But in most cases, those aren’t scaled up to a point where they really impact bigger systems and processes.”

There’s another dimension to scavenging that is more central to the creative process in scientists and innovators — and that’s the act of refurbishing physical objects to fix immediate problems. It pushes people to think in unorthodox ways that end up having an incredible value in the development of innovative solutions, both large and small.

That’s the idea that’s taking bigger hold amongst the scientific community. Liboiron’s venture into dumpster diving next to the LHC is an increasingly common — and more importantly, normal — behavior among researchers.

Still, Liboiron wants to see the reuse and recycle movements move out of the limits of small-scale, household trash — and break out into the world of industrial refuse and equipment. She’s eager to see how the open hardware movement can help push this goal forward — “perhaps through emerging technologies like 3D printers,” she says. In fact, she and others who met at GOSH are currently working on an “open source hardware manifesto” to publish in the coming months that will detail some specific ways repurposed objects can play a bigger role in science and tech projects.

They’re probably on to something. If dumpster diving can happen at a place as unique as CERN, it can probably happen anywhere.