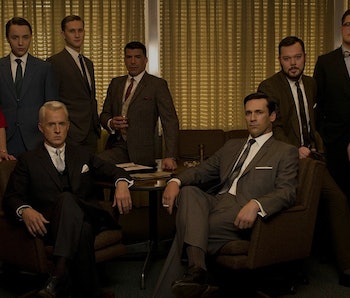 McCann, the advertising giant, has hired an artificially intelligent machine as its new creative director. AI-CD β, as it’s known, will be responsible for analyzing data on popular Japanese television shows and then offering commercial guidance to McCann’s customers. It is programmed to take into account the success of previous campaigns when developing new proposals.

The A.I. system will be in charge of real McCann accounts and presumably have a staff of human subordinates. The machine will join 11 recent college grads at the company’s new employee welcoming ceremony on April 1. How those young ad men and women feel about working for a robot after four years of education will likely be a major test of the feasibility of the A.I. manager.

“The whole company is 100 percent on board to support the development of our A.I. employee,” said Yasuyuki Katagi, President & CEO of McCann Japan. “Artificial intelligence is already being used to create a wide variety of entertainment, including music, movies, and TV drama, so we’re very enthusiastic about the potential of AI-CD for the future of ad creation.”

The other challenge will be stopping AI-CD β from going on a Tay-like bender and ruining McCann’s name for good. Tay was an artificially intelligent chatter bot designed by Microsoft that had to be pulled from the web after making some pretty hateful comments. Hopefully, McCann’s robot can stick to business and won’t be flooding the airwaves with the propaganda its American cousin was touting.

Even if AI-CD β turns out to be less of a jerk than Tay, that doesn’t mean it will be particularly good at its job. Sure, data analysis is important for an advertising company like McCann, but is it really smart to put the machine in any kind of position of authority, even if it is a kind symbolic position? In fairness, the executives at McCann do understand marketing, and it certainly sounds sexy to say you’ve hired the first artificially intelligent creative director. The myths built up around A.I. presently defy reason, so maybe McCann is just trying to milk the hype for some new business while it can.

Or perhaps McCann’s executives actually think the new perspective will help break the code on Millennial habits that has long eluded the advertising industry. The robot was designed by the McCann Millennial Taskforce, which is spearheading the Creative Genome Project. McCann’s buzzword brigade really went all out on this one and may have crossed the line into ridiculousness. Old, corporate advertisers don’t sound any younger or more insightful when they’re hiding behind three layers of high-tech jargon.

Here’s our advice. Keep it real, McCann. You all are the classic ad company that came up with “I’d like to buy the world a Coke,” and “For everything else, there’s MasterCard.” You don’t promote some new hot-shot to creative director right off the bat. You neglect its promise for years, subject it to discrimination, and just as the waves of progress become too strong to resist, you offer a condescending settlement to prevent a lawsuit. You know, advertising.

More like this
Innovation
8.5.2022 11:00 AM
Alexa could diagnose Alzheimer’s and other brain conditions — should it?
By Joanna Thompson
Innovation
7.29.2022 2:00 PM
Amazon's new invention could let you “speak” to the dead — but should it?
By Sofia Quaglia
Innovation
19 hours ago
A wild new plane-train hybrid could whoosh you to your destination — if it can get off the ground
By Molly Glick
Related Tags
Share: