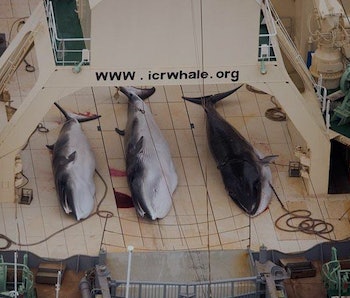 In direct defiance of an order from the International Court of Justice to end the hunt, four ships in a whaling fleet have killed 103 male and 230 female minke whales.

Also announced by the Institute of Cetacean Research, the Japanese organization behind the hunt, ninety percent of the females were pregnant. The Japanese government has confirmed the kills, which took place in Antarctic waters over the last several months.

The release highlights scientific data collected during the trip, including non-lethal tagging and sample collection from some whales.

If you’re surprised to learn more than 300 whales were killed during a single hunt, know that Japan has been killing minke whales under the auspices of scientific research since 1987, when an international moratorium on whale hunting took effect. But critics say the data collected is just a mask for the true purpose — getting valuable minke whale meat to Japanese seafood markets.

Japan took a hiatus from the program during the 2014-2015 season, after the International Court of Justice ruling. But this year the government once again issued a permit for the hunt.

Ocean advocacy group Sea Shepherd intended to set out and interfere with the killing, as it has done in the past. But the efforts were foiled this year by a lack of clarity around where the Japanese whalers might be found in the vast Southern Ocean.

“Instead, the governments responsible for protecting these magnificent creatures stood by, in the complete knowledge that both federal and international crimes were taking place. This empty response from authorities in the wake of the ICJ ruling is a disgrace.”

In what must have been a terrifying encounter, the Steve Irwin was approached this week by two massive warships of the Chinese navy, asking why it was chasing a Chinese ship through Chinese waters. Steve Irwin Captain Siddharth Chakravarty explained over the radio that they were documenting the ship’s illegal fishing activities and tracking its location, and the battleships allowed the mission to continue.

More like this
Science
8.18.2022 2:27 PM
Wastewater can track viruses like Covid-19 — can it do the same for superbugs?
By Allison Parshall
Innovation
8.15.2022 8:30 PM
This high-tech camera may help protect our identities — here's how it works
By Molly Glick
Science
8.5.2022 1:00 PM
The most miraculous sci-fi movie on Netflix reveals a scientific debate over aging
By Tara Yarlagadda
Related Tags
Share: