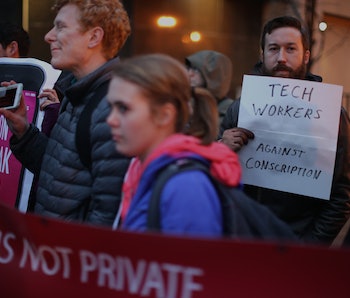 If the court rules in favor of the FBI in the San Bernardino iPhone 5C case, Apple engineers may be voluntarily out of a job. Security and software engineers at Apple are publicly mulling what they will do if they are ordered to create a program that bypasses the iOS 9 encryption software. The New York Times reports that some will likely quit instead of creating a so-called backdoor program. This is big news and little surprise. Apple engineers can afford to stand on principle.

The FBI needs Apple’s assistance because if it tries to crack the encryption codes itself and fails more than 10 times, it will trigger the security software to delete all the data on the phone. Apple refuses to create the software that will enable the FBI to circumvent the encryption blocks on the iPhone 5C that San Bernardino shooter Syed Farook was borrowing as a work phone from the county’s health department. Such a program would have to be made from scratch and could be used again on any Apple device, like a master key. For obvious reasons, this engenders ethical concerns among some engineers.

“If someone attempts to force them to work on something that’s outside their personal values, they can expect to find a position that’s better fit somewhere else,” Window Snyder, a former product manager in Apple’s security and privacy division told the New York Times.

This is true and profound. Encryption specialists are in high demand and can afford to lose a job in order to avoid doing work they believe to be detrimental to society. In a sense, the personal decisions will be made based on personal motivation. Engineers have to decide what they’re comfortable with.

Justin Maxwell, a former Apple user interface designer, summed it up neatly in a Quora post:

“… The general idea is this: You are part of something much bigger than you. The ideas you talk about in the hall, the neat tricks you figured out in CSS, the new unibody machining technique, that’s part of your job, something you are paid to do for Apple’s success, not something you need to blog about to satisfy your ego.”

Being a “Company Man” is not really part of the Silicon Valley ethos, especially when one’s company is being asked to act against its own stated interests. And quitting may not be a big financial sacrifice. According to the job recruiting site, Glassdoor, which crunched the numbers on 487 salaries, Apple’s engineers make an average total pay of $137,739. Specialists make more.

If the FBI gets its way, Apple indicated that it would have to set aside six to ten engineers for up to a month to work on the new software the company has bitterly nicknamed “GovtOS.”

Apple and the FBI will return to federal court on March 22 to get another hearing from U.S. Magistrate Judge Sheri Pym in Riverside, California — which is, funny enough, the day after Apple’s spring product launch event.

More like this
Innovation
8.1.2022 5:01 PM
The 10 best iPhone wallet cases
By Masha Vapnitchnaia
Innovation
20 hours ago
Indoor lights make us sick — this technology could fix that
By Miriam Fauzia
Innovation
19 hours ago
Will Miami exist in 2050? 4 strategies could keep U.S. coastal cities afloat
By James Gaines
Related Tags
Share: