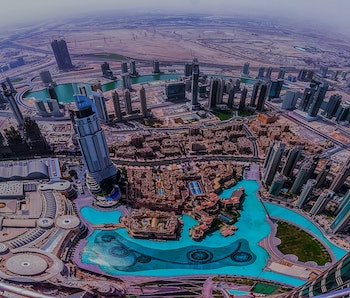 Sometimes the best way to start is to start from scratch. The tech futurists behind Sui Generis, a Montreal-based company with ambitious plans to jumpstart stagnant nations with networks of startup-friendly city-states, don’t see the point in revamping existing countries and their dying governments. The world we live in, they posit, is too far gone. If we want progress, we’re going to have to begin again.

Co-founder Guillaume Dumas argues that the evolution of science, medicine, and technology is being stifled by restrictive governments designed in ways unsuited to humanity’s future needs. Dumas envisions a network of “corporate socialist” utopian societies — built on a foundation of economic freedom, transhumanist ideals, and fun — erected on land shared by existing nations in exchange for a cut of the profits. He’s aware it sounds crazy, but he stands by his vision. Government representatives from Latvia and Madagascar stand nearby, actively mulling his proposals.

Dumas explained to Inverse why nations should be run like companies, why “public work” is necessary to the public good, and how he plans to get away with selecting the “right” people without being, you know, racist.

How does one go about pitching an idea like this to a country’s government?

We consider this first: Who would do this? Who would break sovereignty? But when you think of all the advantages of Singapore, what it brings to its surrounding countries, that economic network effect, you’re forced to reword the question. Who doesn’t want a city like Singapore? Who would say no to that? Who is that crazy?

When you think of private cities, civilization, technology, especially when you’re talking about transhumanism, in a state that’s really self-conscious about the requirements of its clients and the possibility of being an architect of emerging technologies, any country would benefit from having such tech and finance and science clusters in its territory.

What are the parts of our current society that you want to fix?

I don’t hate government — I don’t viscerally hate stuff. Sometimes the will of action depends on laws and on the goodwill of government, but politicians are risk-averse. They don’t benefit from innovation. They benefit from being elected and being in power, so it’s a process that’s very different from business, where risk is fundamental. The bigger the risk, the bigger the reward.

With government there is risk, but all of the risk is in the elections. It’s a different game.

So, you plan to provide a form of government that allows for more risk.

We don’t really believe in democracy.

How will these states be governed?

They will be managed by a board of investors, not a board of administrators. We respond to shareholders, like any company. Traditional democracy would be risky, and politics won’t work with other goals. This government, which will be elected, will be responsive to the new market and new industries and will know how to reduce friction in terms of regulations.

If profitability will be the guiding principle of these city states, how do you plan on providing personal health care and catering to citizens’ basic needs?

We want our project to rethink governments and make structures. Rather than just appeal to entrepreneurs or rich investors or professionals, we also want to appeal to creative artists, physicians, business people. How can we integrate those people into a technology or science state? That’s when we came up with the idea of public work.

A state requires a lot of people. You need to build roads, buildings, and apartments, but it depends on whether the state wants to build them. So, we designed public work as a way to employ our own citizens so they have a steady income. It’s strictly voluntary. Through an app, people find jobs, they specialize in one or two industries, and every week they pick jobs they want — mostly jobs that can be learned in a few weeks or a few days of training — they show up on time, they receive a review of the work, and the most productive people get more spots. They receive a steady crypto-currency income that requires them to pay for their living.

There would be absolute freedom to do business in any other field. You can even start a business and work a little bit for the state. So it caters to a mix of needs. I would call it “corporate socialism.” It’s strictly voluntary.

How will you select who gets to be a part of these states?

Finding the right people is another challenge. The “investigation” process is going to be similar to applying to a university. You send in your portfolio, LinkedIn profile, and experience, and a citizen committee will try to reach consensus. We want innovators, creators, engineers — not only developers, but also artists and creatives.

Also, it’s an intentional community. If you’re not happy, you can go. If you don’t belong and have another citizenship, you can go home. The idea is, you actually come because you want to be a part of it. You want to do the public work. But also, if you just want to do business here then it’s good for you too. Something we want is an absolutely voluntary society.

But there will be a board that screens who gets to come in.

Yes, rather than a bureaucratic process. If citizens are on jury duty and can pick someone to die in jail, they should also be able to get together and decide who should come live with them because they are already citizens. So maybe a bunch of citizens will have to reach consensus on people, asking, “Do we feel we could live with a person like that?”

Having a racist, sexist, or classist bias seems inevitable in that scenario.

We’ve discussed how to avoid having a social pyramid based on income, which would obviously favor white men. So we talked about a way to employ citizens, which means they pick people not based on their income or the money they have, but on what they can contribute to our society. We are going to favor the creatives, the musicians, the innovators, the scholars. It’s a broader reflection of what we value in a city. It’s not only money.

Doesn’t it seem a bit idealistic to think all of these people would be willing to simply volunteer for public work?

They will make income. They are paid by the state. And there will be education, child care, tree planting — a lot of the things that the state normally does, but there won’t be any games. None of the worrying about instability. [Public work] won’t pay much, but when it’s something that you do for 10 or 15 hours a week and you directly see the impact of your work because it’s something useful and you’re in a smaller community — a bit like Iceland, where everybody knows each other — you directly see how you’re helping. So, people won’t work for free. We pay them, and with that money you pay your rent and purchase everything you want in the state.

Think of Berlin: Every year, thousands of kids go to Berlin, but there are no jobs and there’s no money to make — they just go there to be there. We want to liberate fun as an asset, as a state, getting people that want to be there for the culture, the art, the kind of people you meet. Employees in our city will do low-skill work as a way to avoid a lot of people who cannot work … don’t come if you don’t know what to do, you know, I don’t want to work at Starbucks around all those rich assholes. It’s not going to please everyone. It’s a way of trying to solve this contradiction. We’re not trying to do another Singapore or Hong Kong. Hong Kong is not only roses — 72% of Hong Kong is run by three companies, and we want to avoid that at all costs. There, the rent has more than doubled in the last 11 years. Just a few players can raise the market willy nilly. You don’t want your citizens to come here just to spend 70% of their money on rent. You want them to be happy and creative!

Ultimately, this is what’s going to set your money-driven city state apart.

Totally. We want to be a fun hub and a finance hub. I guess we want to be a city that’s designed for human life, and human life is pretty much about having fun, and fun is a big part of being human and playing and experimenting. Free market, designed for pleasure and freedom.