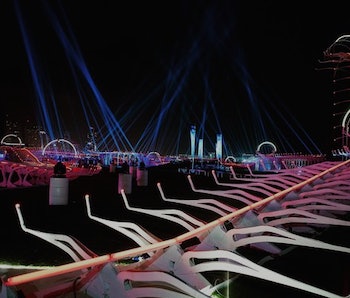 The World Drone Prix finals launched today in Dubai, and like so many nascent sports, it was mix of genial fumbling and pure optimism.

You can live-stream competitors chasing after $1 million in prize money, but in the early stages of Friday’s two-day event, it was often spotty. Your best bet for seeing any of Friday or Saturday’s races is their TV feed with a fair amount of downtime. But when the drones are hitting 60 mph around the 2,000-foot-long aerial track (the first built specifically for drone racing), it’s easy to get excited.

If the tenor could be distilled into any one exchange from the announcers, it would be this:

Announcer 1: “This sport is all about camaraderie. You can see how everyone supports one another and there really is a great love for the sport here. You going to stick around for another race, Kent?”

Twitter, always a party, seemed to care little about who actually won the prize money, so long as users could see some drone action. Depending on how you’re trying to watch 32 teams battle to be the world’s fastest drone pilot, filtering tweets with the hash tag #wdp16 may the easiest method.

Prize money will be awarded across several categories including best track team, lap time, freestyle, innovation, and crowd favorite. Tune in on Saturday for more action at worlddroneprix.live.