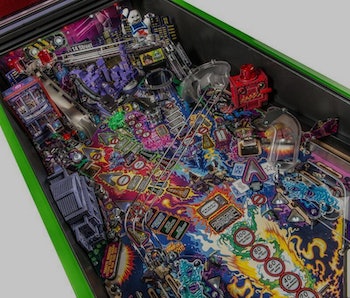 Jody Dankberg still doesn’t know who leaked the pictures. He’s been doing his best to keep the machine mysterious. He made it almost to launch without a leak. Almost. Three more days would have done it.

Dankberg is the marketing director for Stern Pinball, the last major pinball game manufacturer in the United States, and this is an important week for him. Stern launches three cornerstone titles, games linked to major movie or TV franchises, a year, and 2016’s first will be revealed on Thursday. It’s a Ghostbusters game. And this is a Ghostbusters year. Dankberg is too pumped for caginess. Sitting behind his desk in an office park in Elk Grove, Illinois, a suburb of Chicago on the eastern edge of O’Hare Airport, he calls up the concept art, talking about embargoes even as he does it.

“It’s bad and it’s good we’ve had some leaks,” Dankberg tells me. “You never want people to know what you’re making because then you lose the buzz before it’s ready.”

There are three models of the game, all featuring the original, all-male Ghostbusters cast. The high-end version runs $8,500. For that, you get an Ecto-Cooler green Slimer slobbering across the side of the cabinet, heroes on the top board firing their proton packs as the Stay Puft Marshmallow man roars behind them. The game floor is a tour of familiar scenes. Here is the containment unit. There is Dana Barrett’s haunted Manhattan high-rise.

Game and toy manufacturers have been criticized all year for excluding women in their product launches. Hasbro tried to defend itself from complaints that it kept Rey out of the latest Star Wars Monopoly game — by claiming that includig the new trilogy’s heroine would have been a spoiler. There was nerd-outrage when Black Widow was booted from the Avengers toy line. For Stern, focusing on the original Ghostbusters lineup is strictly safe marketing, Dankberg says. Bill Murray’s one-liners have held firm in the culture for thirty years, and no one knows how successful Paul Feig’s remake will be. Pinball machine manufacturers don’t have the luxury of betting on new properties. They are value investors, and Peter Venkman is the pop cultural Berkshire Hathaway.

“If one of our cornerstone titles doesn’t hit like we think it’s going to hit, those other two titles better do really, really well,” Dankberg explains.

In 1999, Stern’s last major competing manufacturer WMS in Waukegan, Illinois went under after sluggish sales. Dankberg became the last man standing, and suffered the nerves that accompany that honor. ”Chicago is sort of the Detroit of pinball,” Dankberg says. “I wish there were still more big companies, because it’s better for pinball. There’s more awareness.”

Smaller companies like Jersey Jack Pinball, which manufactures a 75th anniversary edition Wizard of Oz game and a Hobbit game, have sprung up in recent years, but Dankberg dismisses them as boutique manufacturers. “They have produced one-and-a-half games in 6 years. We have done 22,” he says.

Still, Dankberg claims Americans are about to see a pinball renaissance. Arcade bars have successfully brought adult gaming out of the living room — though at least 50 percent of Stern’s business comes from private collectors who grew up with the game. Pinball is back in the zeitgeist. People even ask the following question: “Want to go play pinball?” Not many people, but people.

And the fans are still there. Dankberg knows a Japanese couple whose apartment is so packed with pinball machines, they sleep under them. The International Flipper Pinball Association now boasts more than 30,000 players around the world competing for championship titles at bars, clubs, and conventions. Still, even big sellers only move around 1,500 units. That’s about 10 percent of where sales were at in the late 80s, but it’s still up and trending the right direction.

The idea of “pinball machine as prestige purchase” is not in keeping with the games history. American pinball traces its origins to early 20th century dive bars, where players competed for drinks. Politicians in New York, Los Angeles, and Chicago banned the games as a form of gambling.

“It’s people around 30 [or] 35, who have some money and for them this is a luxury item,” Dankberg says. “Rich people never really stop buying luxury items. But when dad gets one for the family rec room he wants something he can say is for the kids. ‘It’s The Walking Dead — we all watch that together,’ that sort of thing.”

With Stern relying on three major releases and maybe a special vault edition to keep the doors open, the company pursues licenses with the broadest appeal possible. Lord of the Rings is a strong title, and classic rock games like AC/DC and Metallica are perennial sellers. In this sense, pinball remains a reliable barometer of pop culture success. You haven’t really made it until someone is willing to lose a quarter shooting a silver ball around your concepts. Game of Thrones seems like it will build suck-up change at the bar for years to come, and a Spider-Man reissue sold well in 2015 — but Dankberg isn’t sure about much else.

“At one point, Lady Gaga was the biggest thing in music,” Dankberg says. “But is she as big five years later? If you base your games on something that’s just a fad, you won’t sell them. We look at sequels, we look at trilogies, we look for things with built in histories and fan bases because those are games we can sell here and we can export successfully. The CEO, Gary, always jokes, ‘I’m the guy who licensed Last Action Hero.’”

The industry term for that sort of regrettable decision is, “Great Games, Bad Movies.” A machine can have game-changing software and still die quickly if it’s saddled with a crappy license. This has yielded a collector’s market for kitschy pinball machines built around failed properties. “There are a ton of them from 90s action movies. Lethal Weapon 3, Congo, and Johnny Mnemonic all inspired great pinball games.

“There have definitely been people that have come to us with properties that I’m so glad we decided to pass on,” he says. “I don’t want to say who, because I want to be able to keep working with people. Let’s put it this way, there was one set in a dystopian society with a teen heroine I am so glad we said no to.”

Dankberg is more than happy to goof on his industry, comparing what Stern does to manufacturing medical devices, but it’s clear he does what he does because he cares. At one point, he pauses, and directs the conversation to a wire piece about pinball industry growth. “They used a picture of Stern Pinball. That felt good.”

He was ready for the public to see that image.