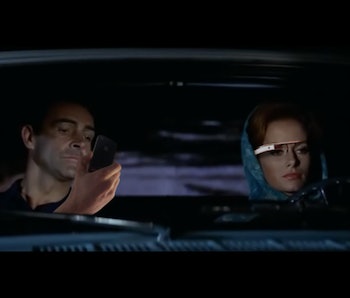 Americans consume an average of 15.5 hours of media every day. In a 24-hour day, that’s a mere 8.5 hours that we take our eyes off our gadgets and focus on something else. And for at least some of that time, our eyes — statistically speaking — are on the road. Ford thinks that is about to change. The company filed a patent last week for an in-car movie theater designed to make autonomous commutes fly by.

The patent makes sense. Given our insatiable lust for media, the average American can probably be counted on to use autonomous drive time, a form of modern down time, to catch up on some shows or browse the web. On average, Americans spend about 46 minutes in the car per day on two different trips. This average decreases slightly on the weekends and differs across age, gender, and the season, but by and large we’re looking at two new primetime slots. That’s either one show in the morning, and one in the afternoon, or a split episode consumed over the course of a day.

The Ford patent is further evidence to support the theory that automakers will inevitably compete with entertainment systems. When the driving experience is no longer engaging in a mandatory way, the degree to which manufacturers can make it engaging in an optional, fun way will be a market differentiator. The laws and regulations governing whether drivers can take their eyes off the road have yet to be written, but many already foresee a time when cars are more like moving movie theaters than cockpits.

While the new hour will hardly make a difference in our overall media diet, it will add a rhythm to our habit that smart content providers may take advantage of to help boost their visibility. Imagine a show that premieres in the morning and ends in the afternoon. Flip it on in the A.M., and just anticipating the later piece provides conversation with your coworkers for an entire day at work.

And these shows won’t have to be agreed upon by fellow carpoolers. While proposals for how autonomous driving will allow passengers to access media, even if you share your commute, VR headsets, individual car headset TVs, and even smartphones enable individualized viewing experiences. Cars are already one of the few places people spend time on their own, so the autonomous vehicle will likely be a place of guilty pleasure watching. Don’t want your spouse to know you’re staying up to date on the Real Housewives? Just wait until your kiss them goodbye and retreat into your own personal reality television.

More like this
Innovation
18 hours ago
This self-healing material could fix your dinged-up car in 30 minutes
By Molly Glick
Innovation
8.1.2022 11:00 AM
This novel technology could jump-start electric vehicle production
By Molly Glick
Gaming
7.27.2022 5:20 PM
Grand Theft Auto 6’s female protagonist needs to be more than a stereotype
By Willa Rowe
Related Tags
Share: