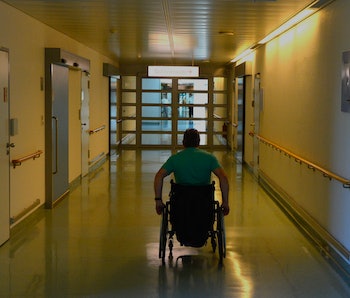 The Zika virus just won’t let up. In addition to its link to microcephaly and its ability to be sexually transmitted, a new report published this week in The Lancet warns that it could also trigger Guillain-Barré Syndrome — pronounced “gee-ya bah-ray” — a rare disorder where the immune system attacks its own nerves, resulting in full-body numbness, weakness, and, in some cases, paralysis. The literally crippling effects aren’t usually permanent, but recovery can take as long as three years.

Scientists haven’t confirmed a cause-effect relationship just yet, but while we continue to uncover Zika’s complicated secrets, the best we can do is be prepared. Inverse talked to a former GBS patient named Dan Meades, who powered through a severe battle with the disorder last year, just days after his daughter was born, to learn more about the condition’s devastating effects.

What were your first symptoms?

On a Wednesday near the end of May, I woke up and the toes in my left foot felt asleep. I guess it was kind of weird. I got in the shower, and when I got out I realized that the toes on my left foot were still asleep, and I thought, that’s not really how asleep toes work. The next day, I went to see my family doctor, and by that time my toes on both feet and fingers on both hands were feeling numb.

But you didn’t know that it was GBS.

My family doctor, who I’ve known for quite a long time, said it’s stress — there’s probably nothing wrong. That’s a pretty stupid thing to say: A 35-year-old guy is coming into your office and can’t feel his hands and feet very well and you’re telling him he’s stressed out because he’s expecting his first baby? I’m not sure those things go together.

He agreed to do a bunch of blood tests. Vitamin B deficiency can cause numbness in your fingers sometimes, but it was pretty unlikely in my case. So that was on a Thursday. On Sunday, our little girl arrived, which was great. By that time I knew something was really wrong. I had continued to get numbness extending from my toes and fingers toward my core, so further up my legs and further up my arms. I was getting weaker. Walking had become a little more difficult and strange. My physicality was changing considerably within those three or four days. By the time I came home from the hospital on Tuesday, I was finding the stairs in our old home were difficult to navigate.

How much worse did the symptoms get?

On Thursday morning when I woke up I wasn’t sure if I could get down the stairs anymore, but I managed to get down the stairs, get into the car, and I drove myself to the hospital and walked the 300 or 400 meters across the long hospital parking lot to get into the hospital. I was in the hospital, rehab, for the next eight weeks. I didn’t go home. So within a week of feeling symptoms I was in a hospital and a week after that I was completely paralyzed. I could still speak, but I couldn’t lift my hands, I couldn’t turn my head, I couldn’t wiggle my toes.

The symptoms of GBS are often confused with those of transverse myelitis or multiple sclerosis. How did your doctors finally diagnose you with GBS?

I had 20 hours in the emergency room with my phone trying to figure out on the physician website UpToDate what was wrong with me. So, by that time I knew what I had. When the neurologist came in the room I said to her, “Listen, I’ve got Guillain-Barré Syndrome, it’s going to take you a few days to figure it out but we should start treatment right now.” The neurologist didn’t see it my way. It’s rare, and as a neurologist, when somebody ends up having GBS, there’s almost nothing you can do for them.

What treatment were they able to offer?

They were going to make me wait four days for an MRI to rule out MS. I had a four-day-old daughter at home. I wanted to go home. Then when a neurologist basically said to me, “Hey, Dan, you’re pretty strung out but you’re not going to make it across a parking lot, going home is not an option for you,” I kind of doubled down and said, you’ve got to do something.

There’s this thing called the IVIg (intravenous immune globulin), which is a funny type of antibody that’s in everybody’s blood that helps fight viruses. It seems to sometimes help Guillain-Barré patients, but not very often and not all that well. They sometimes give IVIg to patients, but if it works they don’t know why. [Getting] quick treatment, I believe, stopped me from spending the next two years in a rehab hospital. I only spent the next two months there.

The effects of GBS are known to progress for months or even years. What was your lowest point?

My low point was complete paralysis other than my ability to still speak and chew and swallow and breathe. I was monitored every half an hour, so there’s a doctor sitting on my bedside saying, “Dan, I think it’s time to start getting you ready for a respirator,” but I wouldn’t provide consent for that. Two separate groups for Guillain-Barré patients, one group that is intubated and one that is not, have vastly different recovery trajectories. Although they were getting quite concerned about it, I was still able to breathe enough that I could tell them to leave me alone. And I didn’t provide consent, which in hindsight was the right choice but in the moment wasn’t an easy decision.

So you never got to that point?

We were very, very close. [On the] toughest night, my wife and then 11-day-old child came to visit … That was tough because I couldn’t hold her at that stage, couldn’t lift my hands or arms. I was paralyzed. Up to that point the conversation was entirely about this is going to take years, but at some point you will likely get back to some version of yourself.

But the following day, I guess day 15 or 16, I started to get stronger. So I could turn my head, my breathing started to stabilize, I was able to start moving around in bed a little bit, which is weird because it doesn’t sound like a thing, a milestone, but that’s huge.

Once you started to regain your strength, what was the recovery process like?

We made the decision right away to get out of the facility and into a rehab hospital. At that point I started spending literally all of my time exercising, working, physio-patient therapy. Most people would spend an hour to two hours a day. I was on a 14-hour exercise schedule [for seven weeks].

How did the recovery period interfere with your ability to work?

I was on an indefinite leave from my employer. I used all my vacation time, obviously, first. And then they had an employment insurance program where if you’re laid off for a bunch of reasons or something you have to take a leave. And that program pays less than half of your salary, but it certainly helped.

Do you think you would have recovered that quickly had it not been for that extreme exercise regiment?

The work really makes a difference. It made a difference for me physically for sure. I was getting stronger every day. An average recovery of this sort of GBS would have been over two years. I went back to work after almost 11, 12 weeks.

This could be a really crippling thing, if it turns out to be a major effect of infection with the Zika virus.

Nobody chooses to do a thing that results in Guillain-Barré. Not that that matters. It could happen to anybody, no matter who you are. It takes a ton of time and money and energy from a community of people to be able to get somebody in a position to get better. And even when they are in that position, not everyone is going to get better.

As it turned out, through luck and hard work, circumstance, and the help of a ton of people, professionals and family and friends included, I had literally one of the quickest recoveries of Guillain-Barré ever recorded. I ran 5 kilometers before work today and I should still be in a hospital bed.