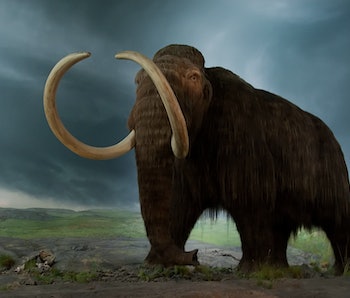 It’s just a matter of time before scientists can genetically engineer extinct species back into existence. Not like Jurassic Park, though, more like Pleistocene Park. The woolly mammoth is the most exciting species that’s in line for de-extinction, and with it the planet could see the restoration of the steppe ecosystem that covered vast sections of the Arctic thousands of years ago.

Russian scientist Sergey Zimov believes that re-populating the Arctic with herds of large herbivores is the world’s last hope to prevent disastrous permafrost melting and runaway climate change — more carbon is locked up in permafrost than is in the Earth’s atmosphere today. And while he’s looking forward to the day when Pleistocene Park will include a healthy mammoth population, he’s not holding his breath. Already his self-funded wilderness preserve is home to bison, muskox, moose, horses, and caribou.

How are these animals going to save the world? By trampling down and digging through snow to get at nutritious grasses underneath. This reduces the insulative power of the snow, and lets the Arctic chill sink deep into the earth, keeping it good and frozen. In preliminary tests, soil in areas where animals were present was about 30 degrees Fahrenheit colder than area blanketed in untouched snow. They also improve the fertility of the land by digesting grasses so that the nutrients in them are quickly recycled back into the environment.

While Zimov’s bison and caribou soldier on, scientists elsewhere are hard at work resolving the technical challenges of resurrecting the mammoth. A Harvard team led by geneticist George Church is on the case, and last year successfully spliced a tiny piece of mammoth DNA into the cell of an elephant using the magic of CRISPR.

The goal is not to make a mammoth clone, which would require a living mammoth cell and is therefore impossible, but to genetically modify an Asian elephant so that it has mammoth-like features — notably, the ability to survive negative-50-degree winters. Thanks to amazingly well preserved mammoth specimen found (of course) in permafrost, the genetic sequencing of the mammoth is well underway. From there, it’s just a matter of comparing its DNA with that of a modern elephant, snipping out the elephant genes, and replacing them with the woolly ones.

If there’s an ethical downside to bringing back the mammoth, it’s in the number of female elephants that will be used and abused as uterine hosts. It’s hard to say how many failed pregnancies there will be before a successful mammoth is birthed, and how many more before a self-sustaining population of mammoths exists.

Attempts to birth a mammoth could begin in 2018. In addition to the Harvard team, Sooam Biotech, the Korean company that brought us cloned coyotes birthed from a dog uterus, is working on it. These efforts are not all aimed at the restoration of the permafrost — Sooam certainly doesn’t think in those terms — but they might end up birthing a valuable tool.

In so much as the mammoths could do important environmental work, they might also be a tourist attraction. This is not an insignificant truth given the state of the Russian economy. Vladimir Putin, who has never been subtle about his obsession with big mammals, might be incentivized to get creative if scientists convince him that de-extinction presents a potential windfall as well as an environmental victory. The view from the Trans-Siberian Railway could get a hell of a lot more interesting.