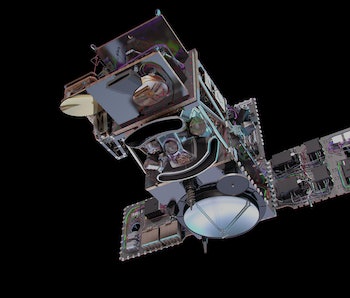 The European Space Administration will launch Sentinel-3A on Tuesday at 5:57 p.m. GMT (12:57 p.m. EST). The third satellite under its auspicious Copernicus Programme, Sentinel-3A will be carrying up a slew of instruments to measure Earth’s oceans, atmosphere, and climatic processes all from Earth’s orbit.

Those who want to watch the launch can hop over to the ESA’s website and catch the livestream.

Initiated by the European Commission, Copernicus (formerly the Global Monitoring for Environment and Security program) is an $9.3 billion endeavor to establish the network and technology that will allow Europe and the rest of the world to conduct autonomous, multi-level observation of Earth. Think of it as a system that will provide 24-hour eyes on Earth from the sky above, monitoring the planet’s “health,” providing security and emergency response information, and allowing scientists to access a ton of data they have never been able to collect before.

While the broad scope of this project includes a lot of ground-based instruments, the space component is the most compelling. Sentinel-3A, like its predecessors already in orbit, will be focused on making measurements of what’s happening on the surface below. This satellite in particular will be charged with monitoring ocean and land data.

This third satellite is a special collaboration by both the ESA and EUMETSAT, which is Europe’s premiere organization dedicated to providing meteorological services to 30 member states.

Each Sentinel mission is actually a pair of satellites that work together — an A and a B. Sentinel-3B is expected to join its partner sometime next year, though the ESA is still planning out the logistics.

Until then, we’ll have to keep our eyes on this satellite blasting off from Russia’s Plesetsk Cosmodrome and look forward to what new knowledge of our world it sends back.

More like this
Innovation
8.15.2022 8:30 PM
This high-tech camera may help protect our identities — here's how it works
By Molly Glick
Science
17 hours ago
A new plasma-based technology could be crucial for living on Mars
By Doris Elín Urrutia
Innovation
8.11.2022 11:00 AM
“Quantum materials” could give the human brain a run for its money, scientists say
By Nathaniel Scharping
Related Tags
Share: