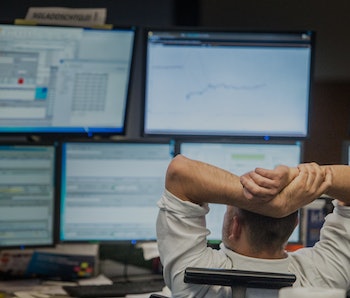 A trade that makes a penny is a win. And with the number of trades the algorithms and processors driving high frequency trading shops are making per minute, days are full of wins and coffers are overflowing with pennies. High frequency trading may not be a new phenomenon, but these coder collectives are steadily making markets either smarter than the people who purport to understand them or way, way dumber. It depends on who you ask.

If you ask Brad Katsuyama, the founder of IEX and a major character in Michael Lewis’s best-selling book Flash Boys, HFT is rendering markets ridiculous. This is why Katsuyama has promised to coil 38 miles of non-metaphorical cable between traders and the servers of his potential exchange, which is still waiting for the SEC go-ahead before listing companies. This would result in a 350-microsecond “speed bump” designed to diminish the high-frequency advantage.

Katsuyama has a fair number of cheerleaders because a lot of people within the financial sector would like to see high frequency traders subjected to a speed limit.

Still, within the confines of HFT firms, coders, statisticians, and so-called “quants” toil in well-compensated obscurity. Things are pretty much as they have been. Inverse spoke with a trader, who wished to remain anonymous due to potential personal ramifications, about the potential end of high frequency trading and the moral questions it poses.

Can you briefly explain HFT to me like I’m five years old?

When you think of trading, you think of a bunch of stockbrokers, like, on the stock floor, shouting into phones, making trades. And that’s not really how it is these days. That’s especially not how it is for HFT.

Well, they most likely are at least one step ahead, right? It seems like humans can’t compete with these A.I.s.

It’s funny, because HFT isn’t the largest portion of the money that’s made on Wall Street. But, it does do well.

How long does an average high-frequency trade take?

The unit in HFT is a microsecond, then?

At your firm, do you all rake in money? Or is it still young enough that it’s still getting its sea legs?

I mean, it’s definitely established. It’s not in that start-up phase where they’re not sure that this is actually going to work. It’s definitely a sustainable business, which is cool. We can hire people to do math, and do things that they love, and make money doing that.

What happens on good days?

Oh, man, it’s pretty funny. I wasn’t expecting this, but on days that we do really well — I think, if we break, like, a personal record, a lot of the times people do, like, shots. One of my coworkers had this little robot, and the robot was just rolling through the office yelling “Shots!” because the guy had had a good day.

What sort of people work there?

A large portion of it is made up of computer scientists, which is to be expected. It’s a pretty young population. The majority of them are either in their 30s or below — by far. And a lot of them weren’t necessarily computer scientists at first. A lot of people studied math, or studied physics, and had a technical background. Most of them come from well-known schools, like MIT and Harvard, and places like that. That’s sort of the population that this attracts. The job is either, like, solving pretty strange and technical challenges from a computer science end, or solving math problems — which is attractive to people like that.

I was surprised by the age. When you think of a typical Wall Street firm, you think of a bunch of old people. And the whole company is, largely, 35 and under.

What was your relationship to the stock market before you began to work there, and how has it changed since you’ve begun?

Oh, I had zero relationship. In fact, I think the majority of people who work there would still say they have no idea how a stock market works. Which is kind of funny. That’s because to write computer programs, you don’t need to be a stockbroker or be a trader. You work within this containerized problem that you’re given. For example, there are people who just manage all the computers that are trading all the time. You don’t have to know anything about a stock market to manage a computer. And that’s a pretty large part of what we do: manage tons of computers.

In the hiring process, when I was interviewing, they had, like, zero questions about what a stock market is.

I don’t think I’m expected to really understand the market unless it pertains to what I’m programming. I pick things up because sometimes, for what I’m doing, understanding the contextual information regarding, like, why the market needs this in this format, or whatever, is part of it. A large majority of it is just programming things that are completely unrelated. So I’m not expected to really know too much about markets at all.

Are there discussions in the office about the implications, moral and economic, of HFT? Do you think about it?

I’m okay with it.

I think, specifically, the book Flash Boys brought up a lot of things where people were like ‘Is this something we want? Is this something that’s okay?’ It talks about how latency arbitrage is ruining Wall Street. The idea that, if I’m a big firm and I have a bunch of stocks I want to buy, and I go to one market and I buy up a bunch of them, then I go to another market and I buy up a bunch of them — by the time I get to the third market, an HFT firm will probably have noticed that someone is buying up all these shares, and re-listed them for a lot more money. So, it really cuts into large firm making huge order profits, because you have to be a little more careful about the way you do that.

But, on the other hand, for the average mom-and-pop trader, I think it’s done a lot of good. It’s reduced the spread. A stock used to have a large spread between pricing — maybe, like, 25 cents — and these days, if it’s a highly-traded stock, it’s like a penny. And that’s because information is being listened to more carefully. For the average person who trades on the stock market, though, it’s done a lot of good, and it’s kind of hurt large corporations.

I think it’s also good. People are trading on better information, right? This information is getting listened to, and dispersed through direct feeds to everything that’s happening on a market. We’re not getting information that the market doesn’t provide. The market provides this information to its users, and that’s what we’re listening to to make trades.

I think it’s totally reasonable to carefully look into the information on markets, and tighten the prices so that the exchanges that are happening are closer together. That’s typically what the result of this is. You won’t get, like, swindled for a price. There’s very little difference in prices when people are listing what they’re selling these days because of how easy it is to obtain the information about the stocks.

What kind of safeguards does the system have in place?

It’s obviously pretty scary when you have something that sends orders as quickly as HFT sends orders, when you’re working on the scale of, like, really fast. Like, what if there’s a bug?. What if your A.I. starts making really terrible decisions, really fast?. No matter what, it’s a computer: It’s going to do it fast. Knight Capital Group is the classic horror story.

It’s kind of like there’s another set of things to monitor the risk. We have to pretty carefully watch over these programs and make sure that — well, they kind of live in a little box. They can do only so much, and after they make too many mistakes, we sort of put them in time out. And talk to the person who was managing them and say, like, “Okay, what’s going on here. Is this working? Do you want us to give it more time? How do you want to proceed?”

It’s kind of like a virtual robot war, is what I’m imagining. Trying to fine-tune these A.I.s to work the best.

It’s easy to fear that people are using automated algorithms and computers to totally act on their own accord, to trade on the stock market, and think, like, ‘This is the fucking future of it? What the hell is going on?’ And that’s definitely not unreasonable. But, I don’t think it’s quite at the point where it’s like this cyberwar on the market. It will be interesting to see if it gets to that point.