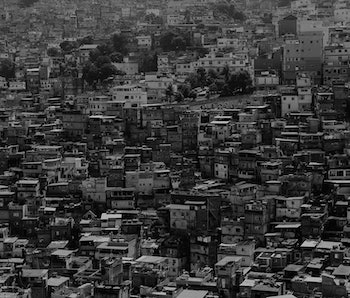 Humans bond to bacteria as they (the humans) are born. When emerging from a vagina, babies are immediately covered in, well, vaginal bacteria. As babies become children, they are exposed to new bacteria of harmless and not-so-harmless variety. Historically, immunity has emerged from these interactions on individual and community levels. The explosion of urban growth is, unfortunately, making it harder to get our good germ on. A new study in Science Advances illustrates how urban spaces have a much smaller proportion of environmental microbes and a higher proportion of human-associated bacteria.

Translation: Your immune system is exposed to a shrunken diversity of bacteria, and the microbes hanging around you are more likely to be infectious.

The international team of scientists who conducted the study examined houses in four different locations throughout South America: an isolated village in the jungle at the Peruvian-Ecuadorian border, a rural village further east, the large Peruvian town of Iquitos, and the city of Manaus, Brazil. All four locations were situated at similar elevations, so they should theoretically present a similar microbial diversity.

That’s the theory anyway. Houses in villages tend to be very large and roomy. They have fewer separate rooms (if they have multiple rooms at all), and walls don’t always connect the ceiling to the ground. Building materials can be permeable, to a certain extent. There’s ventilation.

Living spaces in cities are radically different. They’re smaller and compact — a single building can be home to hundreds or even thousands of residents. The walls are solid, and the only access to the outside are windows — which sometimes aren’t even open. There just isn’t a whole lot of air flow.

“As we move from rural to urban in the urbanization spectrum, houses become more isolated from the outdoor environments, and also become more internally compartmentalized,” explained Humberto Cavallin, a researcher at the University of Puerto Rico and a coauthor of the study, at a news conference on Thursday.

Consequently, because village buildings are so well connected to the outside environment they teem with environmental bacteria. The only kinds of microbes able to survive in urban spaces are the ones that co-evolve next to humans, like Lactobacillaceae and Streptococcaceae. These are also the most likely to be pathogenic.

What’s the solution? For architecture and urban design, our future cities need to develop buildings that have more access to the surrounding natural ecology. That means preserving green spaces and developing parks, which can sustain natural microbes. It means creating buildings with more air flow. It means windows that actually open. After the completion of the paper, New York University microbiologist and study coauthor Maria Dominguez-Bello asked to have the windows to her office at NYU’s medical school opened. They had been shut for nearly 40 years.

But this study is just the first investigative step in a research area Dominguez-Bello emphasized is very new. “We’re still far from testing what are the right bacteria our immune systems should see from the environment,” she said at the news conference. The most interesting follow-up question will be how urban spaces affect our own individual gut microbiomes — and, in turn, how they impact our daily and long-term health.

We’re set to add another four billion people to our world’s urban metropolises before the century is out, which means you can expect a tightened, smaller array of plants and animals in those places. But the microscopic world of cities is also changing thanks to increased urbanization, and it might lead to a future where our homes are brimming with unfriendly bacteria.

Architects and urban designers are just beginning to consider climate, pollution, sustainability, and human behavior patterns as they build our urban futures. They may need to add a primer on microbiota into their expertise as well.

More like this
Innovation
8.13.2022 9:00 PM
Electric vehicles could transform U.S. cities — but not for the reason you think
By Erica D. Walker and The Conversation
Science
8.17.2022 10:00 AM
One surprising insect could help solve farming’s pest problem
By Tara Yarlagadda
Mind and Body
8.7.2022 7:00 PM
Repairing America’s underground infrastructure reveals an unsettled scientific debate
By Robin Lloyd and Undark
Related Tags
Share: