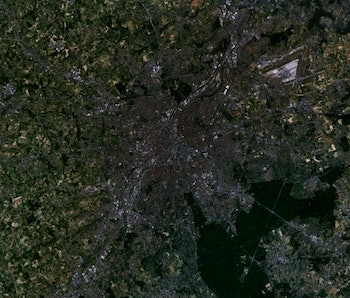 Brussels has some of the worst traffic in Europe. A 2013 survey estimated that drivers in the Belgian capital spent about 85.4 hours in traffic throughout the year — enough to snag the top slot in the entire world. The No. 2 city on the list is Antwerp, helping make Belgium the most congested country in the world. Third on the list? Los Angeles, with 64 hours — a living hell, true, but just 75 percent of Brussels’ mess.

The notoriety was enough to start a tongue-in-cheek petition to add the Belgian traffic jam to the World Heritage List as cultural treasure worth preserving.

But the entire country is geographically smaller than the state of Maryland. How the hell did it get to be such a transportation nightmare?

Dr. Imre Keseru, a researcher with the Mobility, Logistics and Automotive Technology Research Centre (MOBI) at the Free University of Brussels, says it’s a combination of factors, especially in the capital city. For one, more than 50 percent of the city’s population owns a car — meaning a majority of Brusselaars live independently of public transpiration.

The city’s role as a center of employment and administration in the country attracts a lot of workers from surrounding towns and neighborhoods. It’s also the de facto capital of the European Union, and, as such, is home to a great number of functionaries and officials from a great number of countries who, for reasons of privacy, security, and convenience, are sensibly attracted to having their own cars. And tax incentives make it easy for employers to offer a company car — very useful when you take into account Belgians’ preference to live in the countryside.

With the middle class firmly ingrained to a car-centered lifestyle and a relatively robust economy, there hasn’t been a real push to develop public transportation in the city. From the 1950s to the 1980s, says Keseru, urban planning initiatives favored roads, tunnels, and overpasses that led to the inner city.

“These routes, however,” he says, “are very congested in the peak hours.”

And the problem is only getting worse. Brussels boasts a metropolitan population of 1.8 million, which has grown by 1.5 percent each year since 2000. “Traffic congestion in Belgium already costs 1 percent of the GDP annually for the nation,” says Keseru. “If the current situation continues, the city would come to a gridlock with serious economic, environmental, and social consequences. Accessibility of public institutions and workplaces would suffer and economic competitiveness would be impaired.” Couple worsening traffic with environmental degradation, and he fears companies and residents will flee the city.

The solution, as usual, is public transportation. Brussels has to start investing more in buses, trains, and other solutions that don’t involve private, gas-guzzling machines. Public transport use within Brussels rose by 70 percent in the 10 years prior to 2013, so there’s at least some interest. “More and more commuters take the train to reach the capital,” says Keseru.

As it goes, Brussels is the midst of executing a plan for increased sustainable mobility around the region. Keseru says the goal is to reduce traffic by 20 percent before 2018.

How is this going to happen? Simply put, alternative transportation methods. That means pedestrian zones, cycling lanes, more trams and buses chugging through the city, and expanding the metro networks. There are also talks of increasing parking fees (which are currently low in the city).

It’s more radical than it sounds — especially for Brussels. The bus network, says Keseru, will be completely revised over the next five years. New metro lines will finally connect northern neighborhoods to the city central. Cathy Macharis, the head of MOBI, adds that the suburban rail network in development will begin running at full service by 2025. This, she expects, will reduce crowding on the metro.

Still, none of these solutions deal with the biggest issue — weaning Brussels’ residents off of their infatuation with cars. Nearly 61 percent of the population favors changes, but does that include ditching their own motors for different modes of transportation?

Perhaps Brussels will get to keep its cars, but lose the drivers. One of the big arguments behind why we should develop self-driving cars is that automated vehicles could minimize empty space on the road, drive more efficiently in shared fleets, and locate parking faster. If automated cars finally become an affordable option, Brussels will likely be at the forefront of the driverless surge.

But that’s a long way off. And if the World Heritage petition is any indication, Belgians in Brussels will need to get comfy with congestion for a long time.

More like this
Innovation
8.12.2022 10:30 AM
Will Miami exist in 2050? 4 strategies could keep U.S. coastal cities afloat
By James Gaines
Innovation
8.17.2022 6:15 PM
Can we terraform Mars? Scientists may have made a major breakthrough
By Jeff Nagle
Innovation
8.13.2022 9:00 PM
Electric vehicles could transform U.S. cities — but not for the reason you think
By Erica D. Walker and The Conversation
Related Tags
Share: