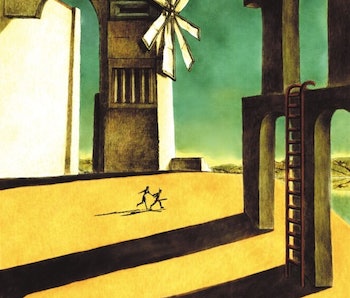 Throw a stone at the catalog of PlayStation first-party games and you will hit a title that falls into what games critic Tim Rogers dubbed the “big friend / baby child” dynamic. In short, the player takes on the role of an older stronger character “the big friend” that protects a narratively important NPC, the “baby child.” Critically acclaimed games like The Last of Us and God of War (2018) both follow this dynamic, a dynamic that owes itself to Ico. The 2001 Japan Studio adventure’s influence can be felt throughout PlayStation, but the heart of the original game is no longer alive in the Sony of today.

On the surface, Ico sounds unimpressive by modern standards. You play as Ico, a young boy abandoned in an empty castle filled with shadow monsters. Early in the game, you encounter the woman Yorda, who does not speak the same language as you. The two work together to escape this prison they have both found themselves in. It is a familiar premise, the game that is entirely a glorified escort mission. Yet Ico has something special within it.

Modern games use side characters like tools, either adding a wrinkle to combat the requirement to protect them or summoning their assistance. Bioshock Infinite’s Elizabeth exists in combat solely to offer aid the second you call for it, but she cannot be harmed or even perceived by enemies. Even characters like Ellie in The Last of Us predominantly add combat complexity by requiring you to protect her at times. Both are only shown to be people within the confines of cutscenes.

Developer Japan Studio focused on communication between two bodies within a world. While Ico is the protagonist and the player character, he is not the only person with their own identity. Ico is able to ask Yorda for help, commanding her to complete a puzzle or open a door, but it is never immediate. Yorda exists in the world and must take time to come to you and fulfill your need. Furthermore, the connection between Yorda and Ico is built on a mutual need; Neither of them could escape on their own.

Ico was a landmark achievement in gaming for its emotional storytelling that relied on gameplay defined by two people helping each other. Game developers from Naughty Dog to FromSoftware have credited it as being integral to the creation of their own games. Yet despite its widespread influence on the PlayStation catalog, Sony does not make games like Ico anymore.

Japan Studio was shut down by Sony in 2021. In the year before this closing, many of the studio’s largest talents left the studio after their contracts were not renewed. In the 28 years the studio operated, it became known for developing strange and unique projects like Ico, Shadow of the Colossus, the Gravity Rush series, and providing production support on games like Bloodborne.

It was a studio for the weird corners of PlayStation’s catalog. At the time of Japan Studio’s closing, PlayStation had seen incredible critical success with The Last of Us and God of War (2018). Though both inspired by Ico these games fail to understand it. They are both power fantasies of father figures defending their children, who are inherently smaller and weaker creatures. They are also both violent stories that justify their bloodshed through the need to protect their companions.

Ico is neither of these things, it puts you in the shoes of a scared child attempting to work with a lonely woman who you cannot understand. There is no power fantasy. While Joel and Ellie or Kratos and Atreus ostensibly have an emotional connection that we see grow in cutscenes, the gameplay does not reflect this growth continuing to use companions solely as tools. It dilutes the experience to the most widely accepted version, one that flows with the violent male-dominated stories that are most profitable.

Japan Studio simply could not exist in the current PlayStation landscape, one that has moved away from an identity as the best place to play the games you want to. “The Last of Us is a great game by default,” says Tim Rogers in his retrospective of the game. This idea can be widely applied to the PlayStation of today: It seeks to succeed by making what a machine deems best. It is unwilling to take risks.

Ico is everywhere in modern games, yet nowhere. PlayStation seeks to capitalize on its past while refusing to invest in the type of development that made games like Ico special.

Ico is available to stream for PS Plus Premium subscribers.